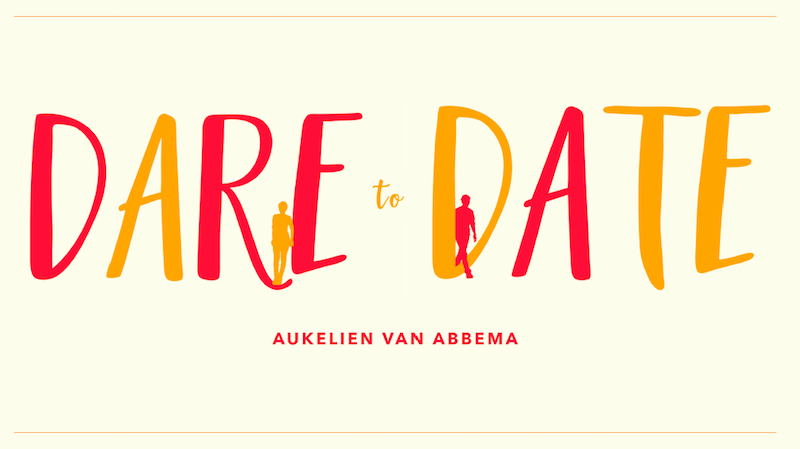 I had the privilege of interviewing Aukelien van Abbema, who is about to release a Christian book in the UK called Dare to Date. She explained a bit about her vision behind the book, and why it’s so important to think about how we date, and her personal journey behind the book.

I love hearing about other people and organisations helping people to think about their faith, dating, and singleness. I’m a big believer in working together to build God’s kingdom and not just our own little kingdoms. Which is why I was so encouraged and excited to hear about Aukelien van Abbema’s soon to be released ‘Dare to Date’ book.

It was a slow-moving afternoon for me, so a Skype call with anyone would have been welcomed. But I was looking forward to this one because it was about an exciting new book. I found out that I was the first person to interview Aukelien about it.

No pressure then! As I frantically crossed out all the obvious questions I was going to put forward.

Thankfully, Aukelien is a very friendly and warm person. We had briefly met a few years ago, and then once more at a conference. We also crossed paths in the virtual world of social media, so the pre-interview chat was more than welcomed.

I discovered through this pre-interview chat that this book has actually been available in Dutch for three years. After years of knocking on some doors, it has been translated into English with a publisher in the UK, and will be released on 19th January.

I actually expected people to be shy or uninterested, but they weren’t at all

It also confirmed, as I thought I had remembered, that this book was written as a result of a dating course she had been running in churches for many years.

The time came to get down to business, and I began to ask her a few questions about this new chapter in her life (pun unintended).

André: So Aukelien, How long have you been running your dating course?

André: How did that first one go? Was it a big success straightway?

Aukelien: Well, the first course had 60 sign ups within an hour! We had to close the list. People were actually crying because they said the church doesn’t talk about dating, and now something is happening and they’re missing out! I actually expected people to be shy or uninterested, but they weren’t at all.

André: Why did you start working in the area of dating in the first place?

Aukelien: I usually say it’s because of three stories. It began with my personal story. I was single and very shy. I felt like I couldn’t connect with single men my age and really struggled.

The second story is to do with my education. At 28 I had my own house, my own business, and was training to be a fully licensed counsellor. One of the main issues I was dealing with as a counsellor was anxiety, but I realised that I suffered from anxiety too!

The third story is to do with the problems I kept seeing in church. I had so many friends who said they couldn’t connect and felt like I felt. They either struggled because of anxiety or had bad relationships in the past and were scared about failing again.

André: What happened next?

Aukelien: Well I started by setting up a think tank in church. We just started to ask ‘why are people in church not dating? What’s stopping them?’ I eventually started to write and design my own course to help these people.

André: As someone who is fortunate to have read a pre-published version of your book. The main thing I took from it was that it’s about giving people very practical steps to begin dating. To move from shyness and anxiety, like you say, into dating. Is that the main aim of the book and course?

Aukelien: The course started out being all about changing behaviour. Getting people to ‘get over it’ and start dating. But now the course and the book are more about holistic help. I find people are often scared. There’s a lot of fear nowadays. People see divorce and wonder if they should even bother. I want to bring hope and a good perspective, so they can build towards survival and start dating. (Read What Should I Do On A First Date?)

André: So what is success? How do you define success?

Aukelien: The course has had many marriages! There are other stories too. There was a man who had been engaged twice but struggled in relationships. He later said that my course didn’t solve all of his problems, but he became more committed to God, himself, and to those he dated. It helped him to date better. There was another guy who said it simply gave him the courage to date.

My real aim is that I want people to feel liberated, and empowered to date and reject

But not everyone has gone on to get married. And some people who have got married are struggling a lot because of other personal issues.

My real aim is that I want people to feel liberated, and empowered to date and reject. That they know why they are dating and why they may be rejecting people.

André: And what is success for the book, what do you want to happen?

Aukelien: I would love it to be a success, and for people to read it. Especially if they are shy but desperate to connect. I hope that the book brings them hope and the search is less frustrating. (Read What The Bible Actually Says About Singleness).

After our short interview, Aukelien told me she was speaking later at a church on the whole issue of sustainable relationships, which sounded very intriguing. She kindly asked me about Naked Truth Relationships and what I’m up to. As she said, it’s great to know there are fellow ‘colleagues’ out there doing this important work.

I think this book will really speak to people who just want to know about how to get over those initial steps of shyness and anxiety, and feel empowered to dare to date.

Imagine if people in church, and beyond, know that God cared about their singleness and dating, and wanted to be involved. I don’t care how they discover this, as long as they know it and believe it!

Do you think many single Christians you know struggle to Dare to Date? Comments welcome Below.